I’m on my way to the Olympiadorf in Munich.

Together with a few colleagues, we are headed out for a small photowalk in the “Bungalow city” and afterwards a old abandoned S-bahn station.

The bungalows are for students and they are all decorated by the students themselves.

Close to the bungalows, there is an old abandoned S-bahn station. The station was officially closed in 1988 and has since then just slowly deteriorated.

Here are my partners in crime for the photowalk:

My colleagues, Walter on the left and Paul on the right.

After my first shot, I felt that something was wrong in my magazine, where the dark slide go in. It’s a “new” magazine which I bought on eBay about a month ago, but today was the first day where I took it out for a field test. So I knew there was a chance of defects…

After unloading the film, I could remove the dark slide and this is what I saw… The mechanism to insure that no light get’s in when the dark slide is removed, is broken. So this nice little foil has been in front of all my shots today…

I have already ordered a new “trap seal kit” for 13 USD. I takes 5 minutes to change it, so it’s not a big deal. 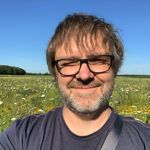